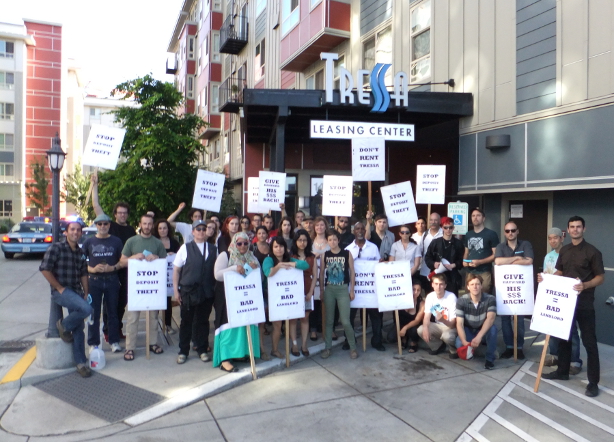 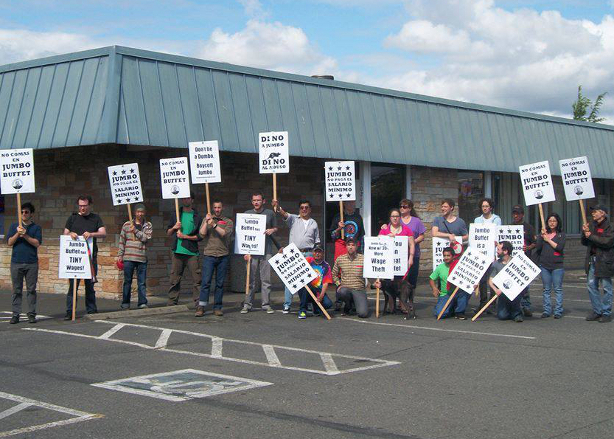 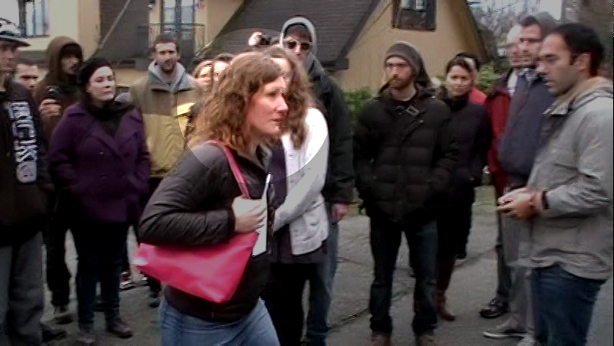 Luis and SeaSol have won our second fight against Pegasus Pizza. A few months after our last encounter, Luis was fired for being a few minutes late due to delays in his Metro commute (something that happens to other workers all the time without reprisals). Recognizing this as blatant retaliation for fighting back on the job with us last winter, we demanded that Pegasus Pizza either give Luis his job back or pay him for the two weeks of wages he lost while he was out of work (approximately $600). More background on this fight and the real reasons for Luis’s firing can be found here.

When we started to pass out leaflets in front of their door, many West Seattle locals were not surprised to hear about Ted or Sarah’s exploitative behavior. We heard many stories of people’s friends, family and neighbors having their time sheets tampered with, wages docked and stolen outright in the past. We also received numerous phone calls and emails from former employees that confirmed that Pegasus has been routinely stealing workers’ wages for years. We began to compile these stories into a public blog that the General Manager of Pegasus, Sarah, told us herself was very damaging to their reputation. The owner, Ted, responded by coming into Luis’s workplace and threatening his life. Sarah on the other hand responded with a short press release that claimed they had time sheets proving Luis’s tardiness. We wondered how seriously we were supposed to take these time sheets, after hearing multiple stories about management routinely editing them for their own benefit.

After we started picketing and shutting down a few lunch and dinner rushes, management apparently had enough. They requested a sit-down meeting during which Sarah admitted she had become “irresponsible” with her payroll. After trying and failing to get Luis to sign some sort of legal agreement, she had another manager run and get two money orders made out to Luis for a total of $600. About this fight, Luis says he is “very happy. Really, I think if there had not been SeaSol I would not have been able to do anything. We have one more victory. We’ve beaten some bad people [Ted & Sarah] that treat immigrants very badly. With SeaSol I’ve learned to help people, and that if we wait, nothing will change.”

We hope that Ted and Sarah have learned their lesson and clean up their act before another worker who has been trampled by Pegasus decides it is time to fight back with our help.

We are happy to announce that, after six months of protest, Borracchini’s has finally begun to allow all workers their 10-minute breaks. (Here is more background on the fight.)

Our many actions have included picketing, postering and even a bake sale of “Cakes Made With Breaks.” At every action we reached new people in the neighborhood who told us they wouldn’t be shopping at Borracchini’s because of the conditions there for workers.

We will be suspending our campaign, as long as workers continue receiving their breaks.

We remain disgusted with Remo Borracchini for publicly pledging $10,000 to Children’s Hospital as a public relations move in response to our campaign, and then donating only a tenth of that amount.

Let’s celebrate this improvement in working conditions at Borracchini’s. Stay tuned for details.