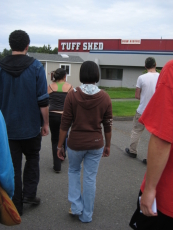 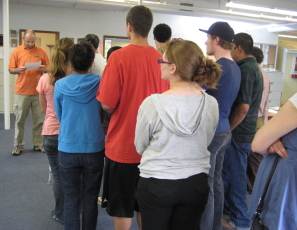 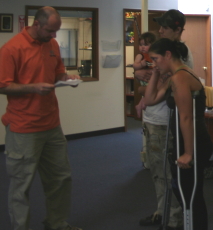 Tomania, who’s been coming out to Solidarity Network actions since the very first one, recently had a serious on-the-job injury while working as a builder for Tuff Shed, a nationwide chain that builds sheds and garages. Her weight came down on her leg at a bad angle, it tore her cartilage, and she collapsed. She couldn’t walk and had to be taken to the hospital. She called and told her boss she’d had a bad injury and wouldn’t be able to work, and hospital staff informed the company that a Workers’ Compensation claim was being filed. A few days later, the boss told her she was fired.

Tuff Shed is claiming they fired Tomania for failing to call in a couple days after her injury, when she was heavily drugged and still not able to walk. The real reason for the firing is obvious: to save the company money on Workers’ Comp insurance. Management is even trying to stick her with the medical bills by claiming – contrary to all witnesses – that the injury did not happen on the job. As a low-income worker and a new mother, she can’t afford to let this stand. She’s been there for us in the past – now it’s time for us all to back her up in this fight against Tuff Shed management.

On Thursday afternoon, July 31st, Tomania and 17 others walked into the Tuff Shed office to present the manager with the demand that the company stop and reverse this abuse of Tomania’s rights. So far they have refused. More serious – and more public – action is coming soon.