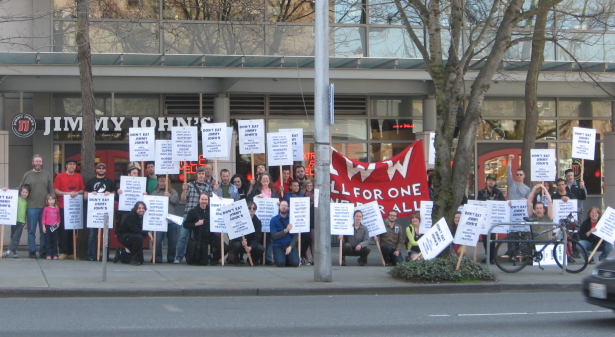 On April 23rd and 29th, SeaSol organized solidarity pickets at the request of two different groups of workers whose employers are attempting to bust their unions: at Jimmy Johns in Minneapolis, and at Provenance Hotels in San Francisco.

On March 21st, Jimmy Johns fired six Minneapolis workers who have been organizing to win paid sick days, so that employees will no longer feel the need to come to work while sick and risk infecting customers’ food. In response to this outrageous mass firing, the Jimmy Johns Workers Union (IWW) in Minneapolis called for support from organizations around the country, setting April 23rd as a nationwide day of action against Jimmy Johns. SeaSol answered the call by organizing a 35-person picket during the lunch rush at the Capitol Hill Jimmy Johns, in conjunction with the Seattle branch of the IWW. Just before picketing, we collected donations to compensate the shop’s employees for any money they might lose from lack of business due to the picket. We picketed for about two hours, directly turning away several customers by explaining why we were picketing, as well as turning away countless others who chose not to approach the picket line. Jimmy John’s was nearly deserted for the duration of the action, at what would normally be the busiest time of the day.

Our other action, on April 29th, was against Hotel Max in downtown Seattle. Provenance Hotels, which owns Hotel Max, is currently refusing to recognize the union contract at its newly acquired San Francisco hotel, called Hotel Frank, which has been union for over 40 years. At the request of hotel workers in San Francisco, we organized a noisy picket at Hotel Max on Friday the 29th, while simultaneous pickets took place at Provenance-owned hotels in both San Francisco and Portland. The management at Hotel Max was extremely upset.

We will continue to take solidarity action whenever we can to support our fellow workers in Minneapolis and San Francisco.