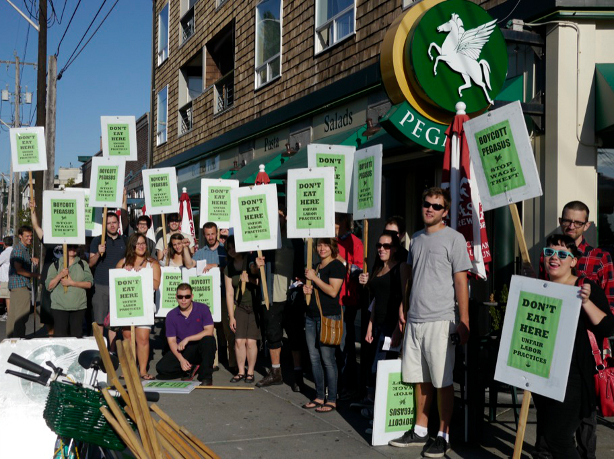 Have you or anybody you know been cheated by Ted or Sarah of Pegasus Pizza? If so, please contact us with your story.

This is not the first time we have had a fight with Pegasus Pizza. You can read about our previous encounter with owner Ted Nicoloudakis and General Manager Sarah Suseyi.

Luis had worked for Pegasus for almost three months but had only received a tiny portion of the wages he was owed. Rather, Ted and Sarah only gave him three bad checks from different banks and scores of broken promises, as they have had done to many other previous workers at Pegasus Pizza.

So Luis joined more than 30 Seasol supporters and demanded his pay. Roughly two weeks later, Luis received his $1,924.24 and began to be paid on time. However, immediately after paying Luis his back wages, Ted and Sarah cut Luis’s hours in half, forcing other kitchen workers to work unpaid overtime to cover many of his usual shifts. It was not until we called Sarah and warned her that it was unacceptable and illegal to retaliate against Luis in this way that they stopped cutting his hours.

In addition, Ted and Sarah started to pile extra work onto his shifts and also forbade other staff from talking with him at all. Luis was not happy about this retaliation, but was willing to work through it.

Taking the bus to work, Luis ended up being a few minutes late a couple of times, and two months ago, Ted and Sara finally trumped up an excuse to fire him. Anybody that rides Metro knows that buses do not always run on time, and sometimes our commutes are delayed. While Luis was working for free, being a couple of minutes late occasionally was not an issue.

Since we started this fight, the response of neighbors and people walking by has been overwhelmingly positive. Many people were not surprised to hear Luis’s story. They have had their own stories to share of their friends, neighbors and family not being paid by Pegasus in the past. We have heard numerous stories of Ted and Sarah’s exploitative and shady behavior.

What has been Ted and Sara’s response? Sarah called us once to set up a meeting. We responded, but are still waiting to hear from her. Meanwhile Ted has come into Luis’s new workplace more than once, physically threatening and intimidating Luis – saying he “will be waiting for him outside after work.”

In this letter to customers, Sarah claims to have time sheets showing Luis’s poor attendance. Sarah’s hypocritical claim of moral or legal high-ground on the issue of time sheets at Pegasus would be laughable if her own and other Pegasus boss’s behaviors were not so criminal. Another former employee tells of consistent hours shorting, few breaks, and bosses who are themselves routinely late:

“They constantly short our hours and blame us because we “didn’t clock out on a 30 min mark”, something that is impossible to do unless we drag our feet to the next half hour, something Clara will scream at you for. I have to keep all of my clock out receipts and add them myself in order to prove I was shorted. And when I do, Sarah just rolls her eyes and says “I’ll look into it”. You have to be a persistent pain in the ass to get your real hours.

We do get breaks, but only if we’re working a double. So if you’re working 6-8 hours you’re out of luck. The kitchen staff can only break if we’re not busy. No one ever gets the 10 min breaks we’re supposed to…

I’ve seen the time sheets they are talking about with Luis. I couldn’t say if they’re real or not, since I know for a fact they routinely edit these records for their own benefit [emphasis added]. And as for being late, they should talk! They never show up when they say they will… Clara is constantly late and says she only comes in to wait on tables and make money. The owners son is ALWAYS late, sometimes more than an hour… Until [a former manager who recently resigned] started we were never allowed to call in sick no matter how sick we were and how dangerous it was to the public. [He] didn’t want us there around him or anyone else if we were sick.”

An excerpt from a letter written by a manager who recently resigned:

“I was very clear that I have ZERO tolerance for payroll mismanagement and inappropriate time sheet editing. By “inappropriate editing”, I am referring to your rounding down on the hours. This practice is illegal, immoral and unethical. On several occasions I have had private conversations with staff that has proof that you shorted their hours on a mass scale. This is not just a random 1-2 hours, there has been cases of checks that were shorted up to 20 hours!”

With this public attention, we hope that Ted and Sarah realize they need to pay their current employees in full and on time from here on out. Who knows how much Pegasus owes current and past employees in our city? To be clear: we are demanding Luis be reinstated or they give him two weeks in lost wages for the time he was without a job to replace his work at Pegasus, roughly $600. Wage stealing bosses like Ted can claim no moral or legal high ground in this situation.

Luis and SeaSol are determined to see this fight through to the end.