By the summer of 2016, residents of Beacon Hill’s Thai Columbian Apartments had long been used to living with broken refrigerators, broken heaters, water leaks, rats, and cockroaches. They put up with it, because the rent was low. Then they found two notices taped to their doors: a new management company called Tecton was taking over, and the rent would be going way, way up – by 25%.

Tenants’ initial shock soon turned to fury. If they were going to start paying serious rent for these apartments, continuing to live in slum conditions was just too much. They had to do something. 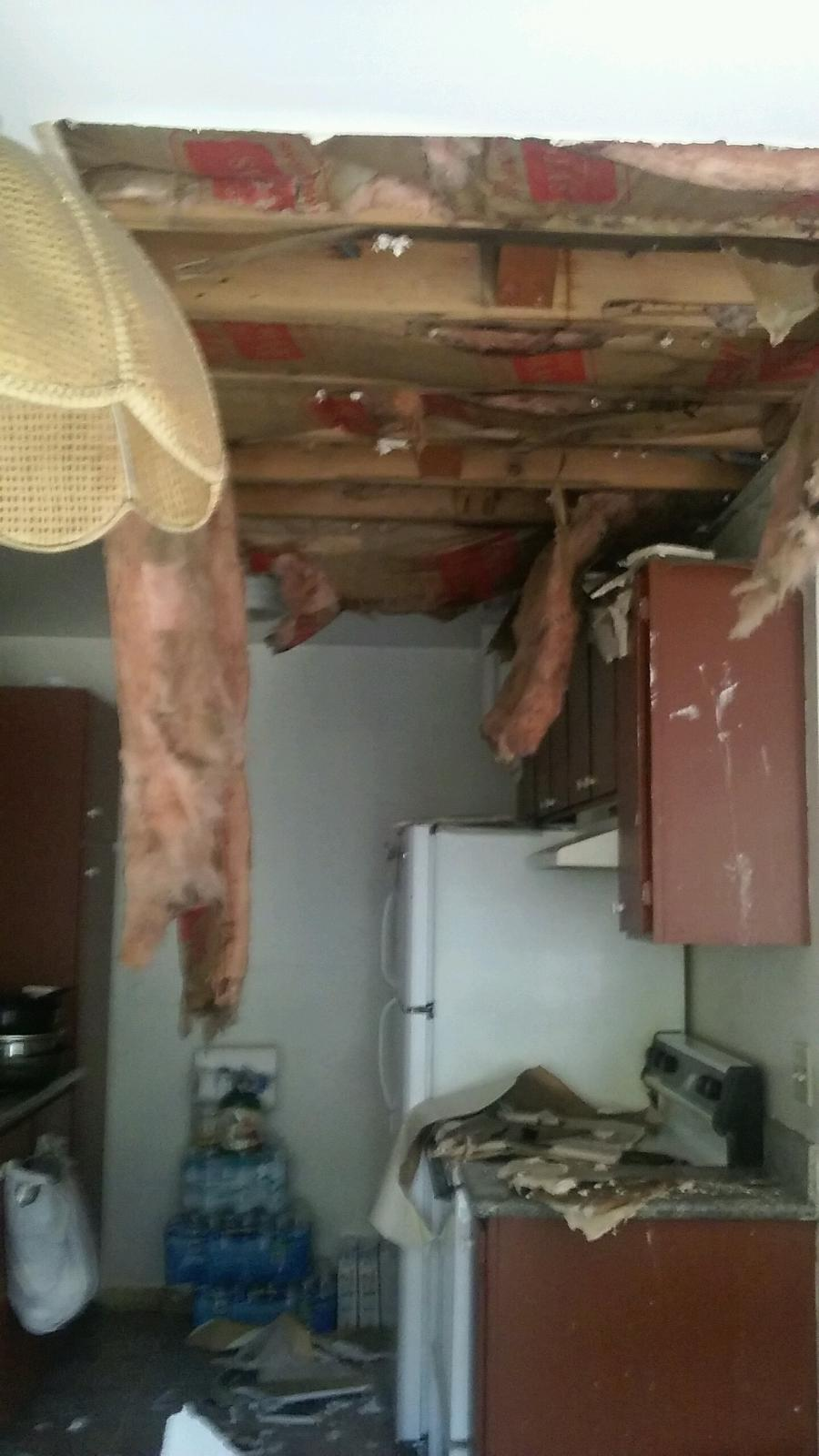 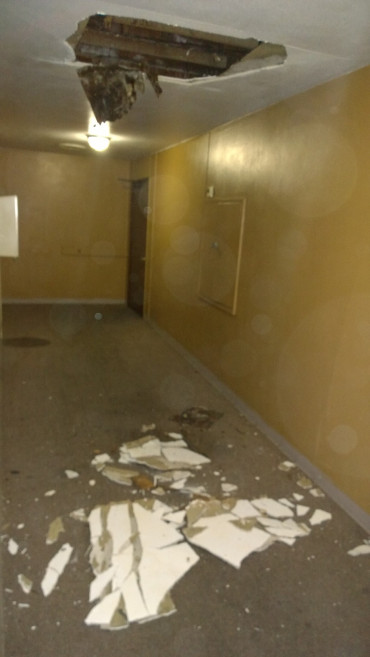 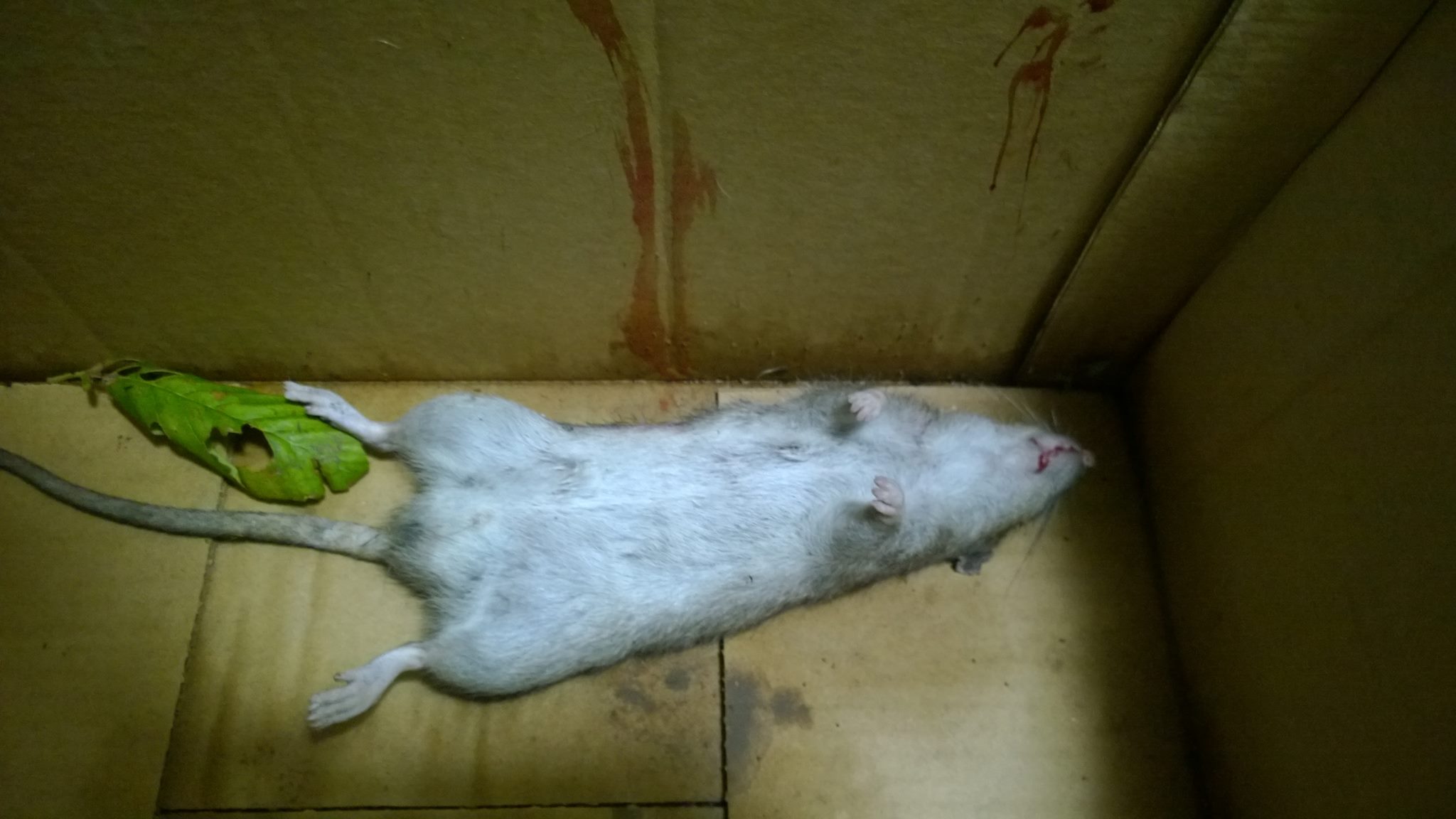 One of the tenants who knew of SeaSol from a previous campaign distributed our contact info throughout the complex, and we quickly received calls from several Thai Columbian tenants. We met with them and began assessing if and how we could help them fight back. With rents skyrocketing all over Seattle, we recognized that we probably wouldn’t have enough power to stop the rent from going up, although it might be delayed through legal tactics. The tenants’ greatest anger was over the continued horrible living conditions, and on that issue we felt prepared for a fight. SeaSol voted to organize a direct action campaign aimed at forcing the slumlords to make repairs. Meanwhile, we could help tenants navigate the complex legal structures that are supposed to protect Seattle tenants from landlord malfeasance, and see if the rent increases could at least be delayed.

We began our campaign by organizing building-wide meetings with the tenants we were already in touch with. SeaSol members joined these tenants in knocking on every door in the two buildings to ask about the issues in people’s units and invite them to meetings. 15 to 20 different units were represented in these early meetings, during which we developed a list of issues throughout the complex which would serve as our list of demands.

It was the longest list of demands SeaSol had ever drawn up, but given the number of horrendous problems the landlord was ignoring, it had to be. In addition to broken toilets and refrigerators, there was one family with no lock on their door, another having water pour in through their living-room ceiling whenever it rained, and a gap in an outside railing over a three-story cliff, where a small child had already fallen and suffered serious injuries.

SeaSol mobilized a strong group of 35 community members and tenants at 10AM on a weekday to go to the Tecton Property Management offices and present the demands. We calmly walked into the offices, where one of the tenants read the demand letter to the CEO of Tecton. This was a particularly empowering moment in the campaign; she stood tall and delivered the demands in the office of the executive. He attempted to cut her off, stating that he “didn’t have time for this,” but she simply continued to read and made him listen to the demand letter in its entirety while the rest of us, packed into his office, looked on. Here’s the video.

Despite the urgency of the repair demands, we gave Tecton five days to begin fixing them before we’d take further action. Tecton chose not to do so. Meanwhile, we used this time to begin helping the tenants follow up about the rent increases with the Seattle Department of Construction and Inspections (DCI), which is tasked with enforcing local housing laws. As one of the tenants had already discovered, Tecton’s rent increase notices were legally invalid, since they didn’t include required tenant-rights information.

While we are and always have been a direct action-oriented organization that intentionally avoids working within the parameters of the legal system as much as possible, in this case the potential value of delaying the rent hike was too great for us to ignore, so we decided to set aside ideological dogma in order to be as helpful as possible to the tenants.

After five days, we immediately began putting up “don’t rent here” warning posters around the buildings. This allowed us to build connections with other tenants and served as an initial shot across the bow, so to speak. From there, we began putting up posters around other Tecton properties in the region to warn prospective renters of how they conduct themselves. It was around this time that we received word from DCI that they would be forcing Tecton to rescind the illegally-posted rent hike. This came as a great relief to many of the tenants, even if it only amounted to two more months in the buildings before they were priced out.

Tecton had the audacity to begin repairing and renovating units that had been empty since before the fight began, prior to beginning work on their current tenants’ homes which were still in severe disrepair.

We took this antagonism as a signal to escalate our fight, organizing a series of pickets targeting the buildings’ owner, Mark Shuler, at the home which served as the office for his architecture firm in Ballard. Prior to this, we made sure to poster the area (with Shuler’s face prominent on the posters) as well as go door to door to speak with Shuler’s neighbors and explain our intentions to picket on their street. While we were always sure to bring the noise to these pickets, we wanted to be sure to engage with the neighbors to make sure they understood the reason for the disturbance, and who was to blame. 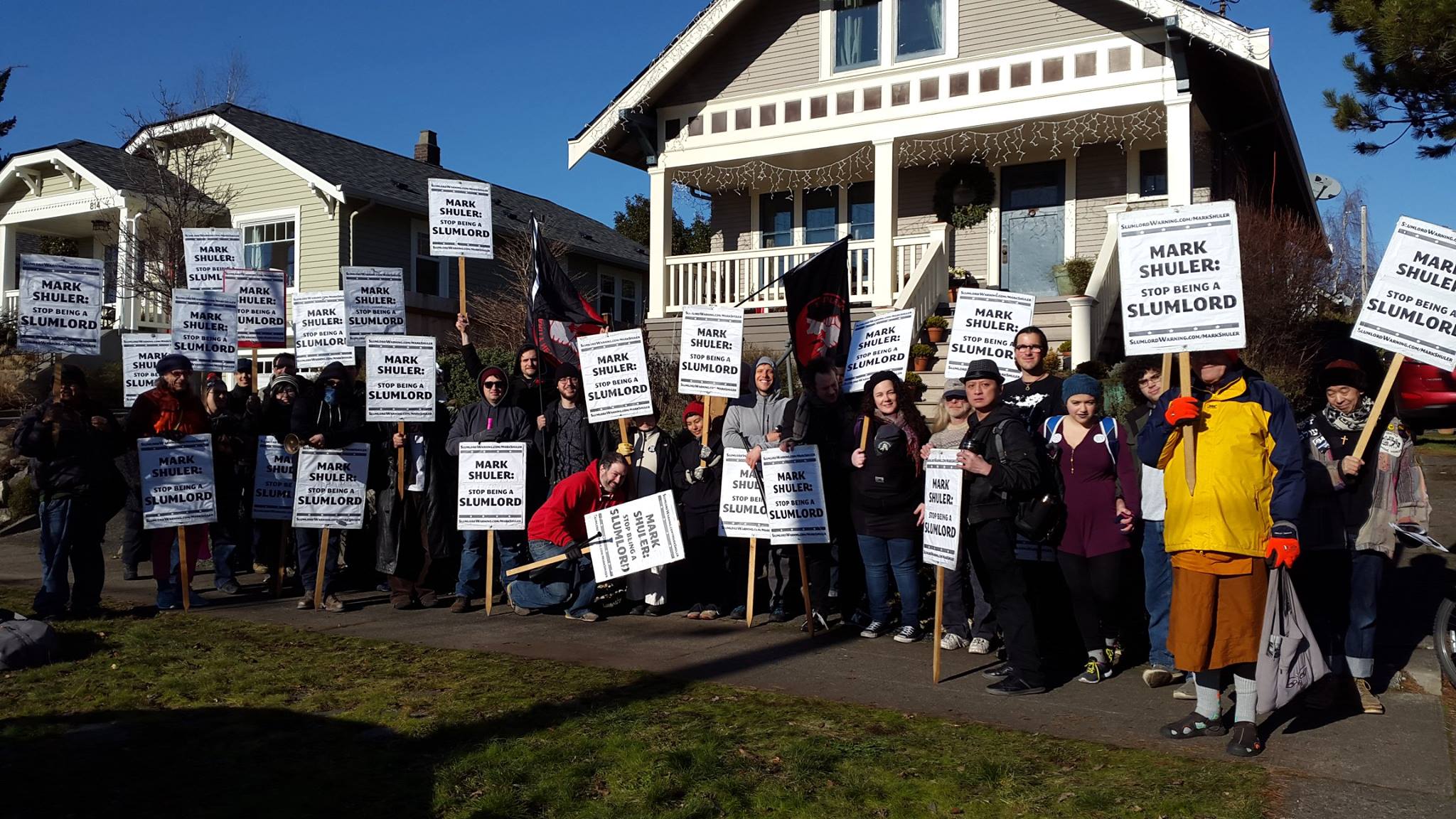 Some get repairs, while many have to move

Faced with these tactics, the landlords finally began acknowledging our demands, and repairs began to happen at a glacial pace. They finally closed the gap in the railing where the child had fallen several months earlier. They replaced the broken laundry machines and some of the units’ broken appliances. They fixed the mailboxes, which had fallen into such disrepair that the postal service had been threatening to stop delivering to them. They hired pest control people to at least try to address the cockroach and rat infestations.

We were able to further delay some of the rent increases in early 2017, after one of the two apartment buildings failed a DCI inspection that we coordinated with the tenants. Despite our efforts on this front however, the majority of the tenants were eventually pushed out of the apartments over the next few months. Tecton worked tirelessly to try and rent out the newly-renovated units at much higher rent levels, but didn’t find much luck with it. This was partly because of the warnings we posted around the buildings and online, but also because the rents they were asking for were just too high. Rather than keep rents at a reasonable level, the landlords in effect chose to collect no rent at all from most of the apartments, and in the end we couldn’t stop them from making that choice.

Even after the rent increase took effect, there remained a core of Thai Columbian tenants who were engaged with SeaSol, and several still-inhabited units had major problems that had not been addressed. One family still didn’t have a working refrigerator. Another still had water coming in through the ceiling during rainstorms. A tenant still had water leaking from the pipes in his bathroom. There still wasn’t sufficient garbage collection, so the area out back was still a rodent-infested trash heap. We were determined to give the landlords no peace until all remaining tenants had gotten their original repair demands met, or else received relocation (either money or a new apartment) that was acceptable to them. 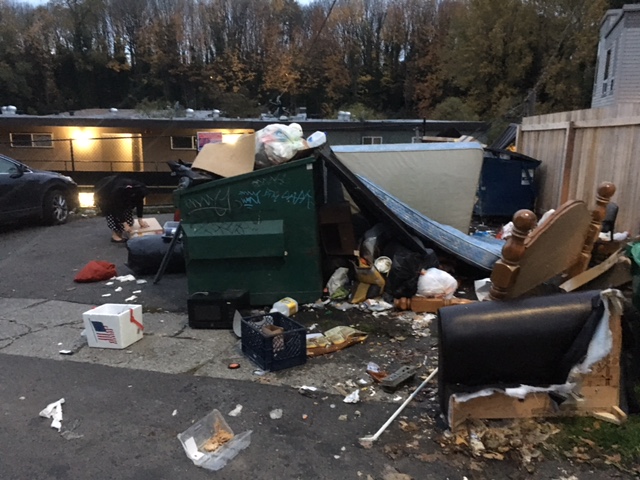 To highlight the remaining repair demands, every week or two we chose a specific issue to bring to the landlords’ attention continuously, via request forms, emails, text messages, and phone calls. Meanwhile we launched a satirical “ShulerAID” charity campaign, asking people to spare change for this unfortunate landlord who was too poor to maintain decent conditions. We publicized it online and with posters around Mark Shuler’s neighborhood, culminating in a “benefit concert” in front of his home. We also rallied a small group of about 15 people who marched into the onsite office to submit a pile of repair requests on behalf of a tenant who was still dealing with a huge leak in their ceiling. We covered the area around the Thai Columbian with posters encouraging neighbors to complain about the lack of adequate garbage collection. We combined these tactics with a series of weekly ShulerAID postcards that we sent to the homes of Mark Shuler’s Facebook friends.

All this appeared to do the trick. The broken refrigerator was replaced. The leaking bathroom pipe was fixed. The tenants with the leaking ceiling were given a different apartment. The landlord added an extra weekly garbage pickup. With all of our demands now having been met, we voted to end our fight.

This was a difficult fight for both Seattle Solidarity Network and the tenants. Our organization joined the fight only a month or so prior to the initial rent increase going into effect. This left us without a lot of time to fully engage all of the tenants in the buildings. Although we did end up significantly delaying the rent increases and forcing an improvement in living conditions, some tenants had already given up and moved out in the fall of 2016. Despite our best efforts, it takes a lot of time to get 30+ apartments-worth of individuals with a variety of language barriers on the same page and organized. In the future, we need to find ways to build more prep time into our campaigns, or else get it done faster while still being thorough.

We are still very proud of having helped the tenants delay the rent increases even for a few months, saving each of them hundreds of dollars and giving families who had to move more time to find other housing. In the process, we learned a lot about how to navigate the subpar legal systems in place for tenants. While these systems helped us create some breathing space, it ultimately still came down to ourselves and our direct action tactics to actually get the repairs made. Meeting all of our repair demands was definitely a costly experience for the new owners of the building. However, it was nothing compared to the human cost of making people live in slum conditions.

The Thai Columbian campaign also brought several fantastic individuals and organizers into our organization who were tenants at the complex. As always, one of our most important goals in a campaign (secondary only to getting the demands met) is to develop organizing skills amongst the individuals we are working with so that in the future, they can assist in other organizing campaigns while knowing that they have Seattle Solidarity Network watching their back should any other predatory landlords or bosses decided to wrong them. We are only as strong as the people who make up this organization and gaining active organizers is a critical component of continuing to build a vibrant resistance to capitalism and all of its toxic consequences in our community.

Seattle Solidarity Network remains committed to the fight against gentrification in our community as it represents an all-out attack on the working class at the hands of those who already have the most. If you or somebody you know is experiencing wrongdoing in the workplace or housing, please do not hesitate to get in touch with us by call or text at 206-673-6074 or by email at info@seasol.net. If you are part of a solidarity network and need advice on a campaign or are looking to start one, please get in touch with us as well. We want to continue to be a resource for organizers across the globe as we each begin to take action in our respective communities to build a strong and responsive network to fight alongside the working class.