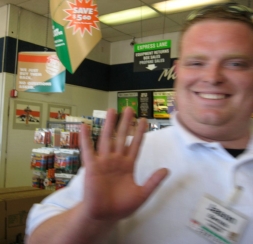 Marrico’s General Manager at U-Haul was an abusive boss, with a habit of yelling at workers and firing them with little or no justification. In his case she claimed, without showing evidence and contrary to his own memory, that he – a good worker of two years standing – had forgotten to put away some padding that a customer had used.

Marrico has decided to fight back, with the support of others in the Solidarity Network. This first action was to deliver his very modest demand that the company erase his firing and instead accept his resignation; that they acknowledge this in writing; and that when future potential employers ask them for a reference check, they report nothing but that he was a good worker who resigned voluntarily.

Update: Having been personally assured by the regional manager that U-Haul does not give out any details about their past employees, Marrico has decided he is satisfied and ready to put this behind him. Those of you who came out to support him, he says he really appreciates it and he’ll be there for you in the future.