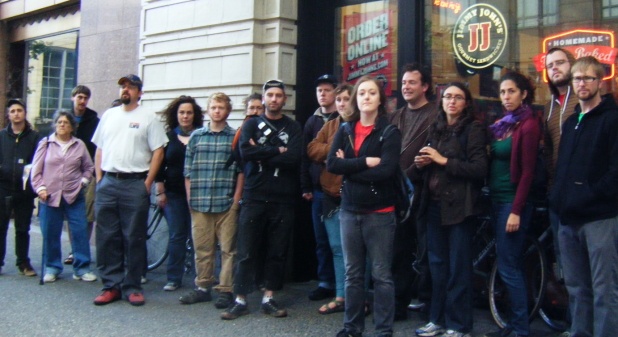 Recently a visiting Jimmy John’s executive walked by Jason, a hardworking bicycle deliverer, and didn’t like the way he smelled. He noticed a whiff of last night’s beer and cigarettes, which Jason had been sweating out through hours of hard pedaling. With barely a word, just for that, he casually had Jason fired.

The truth is it’s not Jason that stinks, it’s this kind of arrogant, heavy-handed corporate management which casually throws a worker out of his job on a whim. Thursday June 25th, a group of around 20 friends and supporters joined Jason for a visit to Jimmy John’s downtown sandwich shop to politely deliver a message: management should correct this injustice, either by reinstating Jason, or if they can’t do that, then by providing him with a modest severance pay.

Management has refused. We have now started an ongoing series of lunch-time pickets at Seattle-area Jimmy John’s sandwich shops, all seven of which are under the same franchise owners. Our message is simple: “Support Jason–Don’t Eat Here!”.

Our pickets–three so far, at two locations–have been cutting their usual lunchtime rush of customers down to a tiny trickle. Many customers leave promising not to eat at Jimmy John’s in the future. Our next step is to picket more of their busiest locations, and to bring our message to delivery customers.