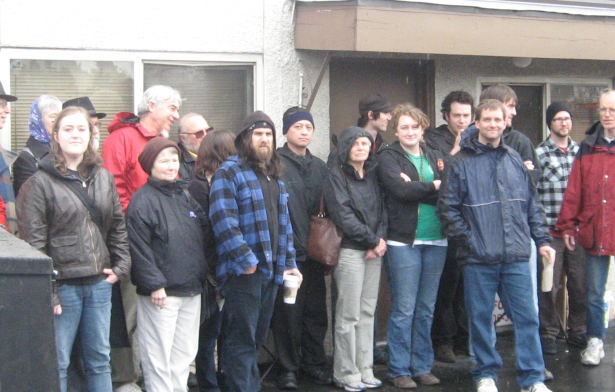 Here is the story of our latest fight, in John’s words:

How I faced down a vindictive landlord
by John Vogt

Loren Ruud was my landlord. The apartment had bedbugs in it. I tried to get rid of them, I bombed it three times, but I couldn’t get rid of them. It was an old apartment. The place wasn’t up to code.

It was terrible. I had to call a crisis hotline. I also had to call the housing authority, because the apartment had bedbugs, it had an unsecured door, and it had dry rot in the kitchen. And as soon as Ruud found out that I had called the city, he came up to my place on Thanksgiving with no notice, and threatened to evict me. He put a ten-day notice on my door.

The housing inspectors rescinded the ten-day notice, since Ruud was trying to retaliate against me. They decided that I should vacate by December 20th and the landlord should pay me $1,000. I vacated December 17th. I left the place clean and tidy.

Then Ruud decided to come after me for $1800 in “damages to the apartment”.

I called my friend Nohl, and he told me what he knew about Seattle Solidarity. He had gotten one of their flyers at the Martin Luther King Jr day march. I called Seasol, left a long message, and sent an email, and then I met with Kaleen, Lee and Ryan at Bedlam Coffee.

We delivered a demand letter to Ruud, saying: rescind the charges of $1800, don’t send it to collections, and “leave John alone.” We waited two weeks, and there was no response to the letter. Then we decided to poster the place. The posters said “Beware: do not rent from 9632 Aurora Ave N – environmental sickness, bedbugs, dry rot…”

The strategy was to let the people in the area know about the conditions in those apartments, and that the landlord steals deposits and rents out substandard housing.

On a Thursday, one week after postering in Loren Ruud’s neighborhood, where he lives, he called me and said “please stop what you’re doing. If you and Seattle Solidarity stop your actions against me, I will not send the $1800 to collections.” And we agreed. And that was it.

The corporations don’t want to pay out anything to workers, and the landlords don’t want to pay to maintain apartments, so they’re trying to pass all the costs onto their tenants. There’s a great need for Seattle Solidarity. In me, they now have a good volunteer.

About the author: I live in White Center, WA. I’m originally from Chicago. When I can, I drive trucks for a living and work in the wholesale industry. I was in Teamsters Local 174 for seven years.