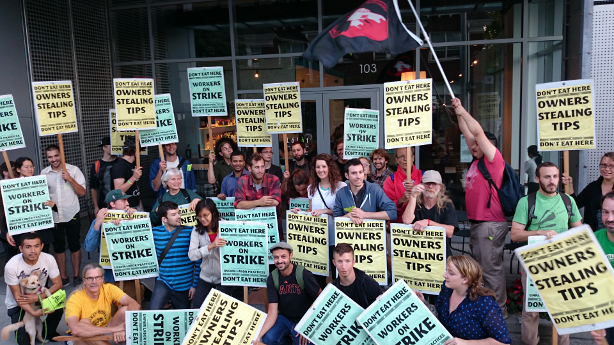 When Hien started working at La Lot she was told that things there worked a little differently: management would retain 60% of any tips she earned. She had never worked in a restaurant before, didn’t know anything about the relevant labor laws, and needed a job– so she agreed. She quickly learned that most of her co-workers were also working under similar or even more exploitative arrangements. To make matters worse, managers routinely belittled and disrespected their under-paid workforce. As time passed, and Hien began to compare what her paychecks should be to the meager sums she was actually receiving, she decided she needed to do something. She approached some of her co-workers about the issue, and two of them agreed to go with her to confront the owner about her unfair and illegal practice.

In the end, Hien and one other co-worker went to have a conversation with their boss. The owner was upset and refused to give them all of their tips, but initially agreed to let them retain a larger share. Hien wasn’t satisfied but was feeling better until the next week’s schedule came out: her hours were cut in half. Then she received a call later that same week telling her they were training someone new so she would only be working one day per week now. She was clearly being retaliated against for standing up for herself and her co-workers. She was furious, but didn’t know what to do. She began approaching various government agencies such as the Washington State department of Labor and Industries and the city’s Human Right’s Commission, but the outlook wasn’t good. All of those processes would take a long time with uncertain results, and Hien and her husband needed that income now. Luckily, Jeff, her co-worker who had intended to go with her to confront her boss in the first place but had been on vacation at the time, had heard of another group that might be able to help.

Jeff and Hien met with a few volunteers from SeaSol and things started to move quickly. Their demands were simple: restore Hien’s schedule and implement a fair tip structure at La Lot. They would go on strike due to unfair labor practices with SeaSol’s support until all their demands were met. They approached some of their co-workers to see if they would join and while they supported the demands without exception they were too fearful of retaliation to join. After all, they had just recently seen what happened to Hien’s hours after she spoke up. On the afternoon of Thursday, August 7th, Hien and Jeff marched into La Lot with approximately fifty supporters from SeaSol to deliver their demands in writing and begin their strike.

Hien and Jeff have now been on strike for over one week. Management has indicated that they may be willing to settle, but have so far refused to actually implement any changes at La Lot. SeaSol members have twice gone to distribute fliers during La Lot’s busy lunch rush, typically turning away approximately 25% of would-be customers with just a few people. On the evening of Friday August 15th, we held our first real picket outside the restaurant. More than forty SeaSol supporters chanted and held signs brining dinner business at La Lot to a stand still. The pickets will continue to become more frequent until the striking workers’ demands are met. Please stay tuned for more information about this exciting campaign.