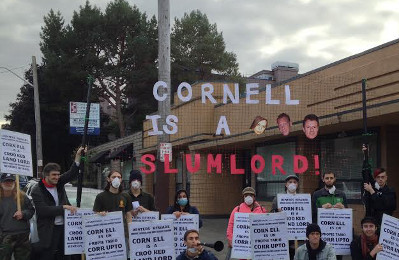 The first round of our nine-month fight with Cornell & Associates has ended in victory for the Sterling Manor Tenants Committee and SeaSol. To satisfy our demands, the landlords have so far spent over $50,000 on an ongoing large-scale project to fix the problems of mold and decay that have long plagued the Sterling Manor apartments in north Seattle, causing health problems and triggering one of SeaSol’s most ambitious campaigns to date. “It’s important not to be intimidated into allowing our rights to be violated,” says a member of the Tenants’ Committee. “It’s hard to decide to get involved in a fight, but in the end you can do anything with support. We did it.”

Cornell & Associates, which manages Sterling Manor, is one of the biggest residential landlords in Seattle. We knew from the outset that they might not care about tenants getting sick due to lack of maintenance, as long as it didn’t hurt their business. However, we had no idea of the level of hostility with which they would react to our demands for mold inspection and repairs.

Within a few days of the August 2013 demand delivery, Cornell & Associates launched eviction attempts against two Sterling Manor tenants who had signed onto the demand letter. In response, hundreds of “Don’t rent here!” warning posters went up around Cornell-run apartment buildings, replaced over and over as management scrambled to keep removing them. Online ratings of Cornell buildings plummeted as people posted dozens of candid reviews, and Sterling Manor’s official photos on Yelp.com became close-ups of the mold and bedbugs in the building.

We held pickets outside Cornell’s offices on a weekly basis, displaying a huge “Cornell is a slumlord” banner. Delegations visited the neighbors of Cornell executive Bart Flora and of the manager of Sterling Manor, letting them know about the slumlords in their midst. SeaSol’s allies in Florida even brought the message to the neighborhood of Sterling Manor’s owner, visiting the small beach-front town where he was spending the fall and winter.

We stopped one the evictions by fundraising to pay off a disputed utility bill. The other eviction order was eventually dropped because the tenant, Paula, had been planning to move anyway. But she remained active in the fight: “Even though they tried to evict me, I decided to continue supporting the fight, so that the next people to move in wouldn’t have to suffer like we did,” Paula says. “I still have health problems even after moving out.”

Some tenants were intimidated by this retaliation, but the most active Tenant Committee members became more determined than ever. One tenant joined the SeaSol organizing committee. Seeing that the eviction attempts weren’t stopping us, the company resorted to its next tactic, hiring a law firm to sue SeaSol and three individual SeaSol members.

Their lawsuit was designed to make our people afraid to be seen on the picket lines. First one individual member was sued, then a second, then a third, with the documents listing a series of not-yet-named “John & Jane Doe” defendants. Their lawyer showed up at one of our pre-picket meet-ups bearing a thick stack of lawsuit papers and photographed of people’s faces. He lectured us loudly (until we shut him down) about how, if we failed to respond to the lawsuit, we would automatically owe Cornell huge sums of money and our credit would be ruined forever. He seemed to assume that we—an organization with no funding, no office, no staff—would not be able to cope with a lawsuit.

He should have known better. SeaSol has already been sued once before, by Lorig Associates in 2010, and we carried on and won our direct action campaign, all while fending off their legal attacks with the help of some great pro-bono lawyers. This time around we were stronger and better prepared. Their claims were baseless: essentially Cornell told the court that we were hurting their business by lying about mold problems at Sterling Manor. And yet we had photos of mold-covered walls, and even inspection reports from the American Lung Association which showed excessively high moisture levels. Within weeks, we secured excellent legal counsel (BJT Legal’s Brendan Donckers, who had defended us against Lorig), and raised money for legal costs.

The pickets at Cornell’s offices, which they were going to great legal expense to try to stop, did not stop. Neither did the posters, nor the embarrassing neighborhood protests. We also sent letters to dozens of landlords who employed Cornell to manage their buildings. According to court documents, one landlord fired Cornell.

The first clear sign that we were winning was when the owner of Sterling Manor, Richard Herman, made a personal visit to the building. Soon after, a series of major repairs began, including replacing water damaged carpets and doors, fixing leaks, replacing sheetrock and remodeling apartments, remodeling kitchens and bathrooms to prevent mold, and replacing the roof.

Unfortunately the landlords did not bring in an independent mold inspector prior to starting the repair work. However, based on tenants’ observations, we have reason to believe that this is a genuine and substantial effort to fix the mold problems, unlike the superficial work (like painting over the mold) that had been the rule before our fight. At this point over $50,000 has already gone into these repairs, according to court documents submitted by Cornell & Associates’ lawyers, with promises that the work will continue.

Cornell’s lawsuit received an unfavorable judgment in court on April 4th, 2014, which they are appealing. We hope this will be a lesson to other businesses and institutions who think they can use the legal system to squash collective action.

Assuming the ongoing and promised repairs are carried out and there is no further retaliation, we are declaring victory in our campaign against Cornell and Associates. Given Cornell’s size and reputation, as well as our ongoing relationship with the tenants, we may well have to fight them again. But for now, it’s time to celebrate a hard-earned victory. Thanks to everyone who’s helped carry SeasSol to one of our biggest victories yet!