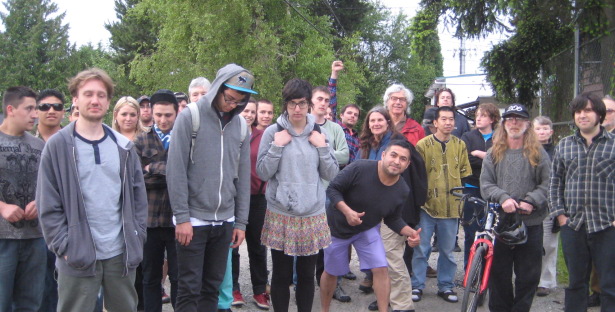 Alejandro moved in to one of Victor Venavides’ “Delridge Cottages” in West Seattle last year with his cousin. The place was rundown, had rats, and Venavides repeatedly ignored several requests for repairs, including a shower that went unfixed and unusable for 25 days and a stove Alejandro had pay to have repaired himself. When Alejandro’s cousin decided to move out, Venavides told Alejandro that he was expected to pay an additional $500 security deposit. Alejandro said he didn’t understand why he had to pay it, given the fact that his cousin had still never had his deposit returned and the place had not been cleaned- but Venavides insisted. At the same time Alejandro was having to scrape together money to pay the additional deposit in increments as well as his monthly rent, Venavides started upping the rent. In less than a year Alejandro’s rent increased over $200 per month.

Weary of Venavides’ bullying, Alejandro finally moved out at the end of November 2009, thinking he’d never have to hear from Venavides again. What Alejandro didn’t know at that time was that it is actually only after his tenants move out that Venavides really goes after them. Venavides quickly filed a lawsuit seeking several thousand dollars in damages from Alejandro. Alejandro had no money for a lawyer and did not speak enough English to understand what the lawsuit was all about. It was at this point that, with the help of some friends, Alejandro got in touch with SeaSol. As it turned out, Venavides was falsely claiming that Alejandro had had nine people living with him.

It quickly became apparent after a little digging that this sort of bogus lawsuit was not at all uncommon for Venavides’ former tenants. Venavides’ plan, as he has done to many others, was to use his knowledge of the court system, and Alejandro’s lack of resources and legal expertise, to win a default judgment and begin garnishing Alejandro’s wages. This would add a small extra profit to Victors shady business operation as a landlord while causing serious and unjust hardship to Alejandro.

So, on June 15th nearly 30 SeaSolers showed up at Venavides’ door with a simple message: drop this lawsuit immediately or face of the consequences. In the following weeks we put up posters warning people about Venavides around his properties, conducted a door-to-door tenants investigation, and left letters on every car outside his workplace saying we would be coming soon with important information about a slumlord in their midst. After five weeks of relentless pressure Venavides finally realized he had better let this one go, and Alejandro received a letter announcing that the lawsuit had been withdrawn, “with prejudice”.