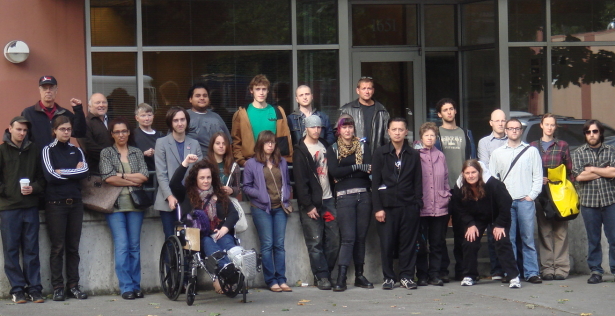 For three years, Gladys lived with her daughter in the King Way apartments, owned by Housing Resources Group (H.R.G). One day this summer, Gladys’s daughter was in a car accident. Luckily, everyone was ok. But less than four days after the accident, management had the car towed out of Gladys’s private parking spot. Apparently this was part of a crackdown on damaged vehicles. Rather than personally contact her to let her know she needed to move her car, management simply placed a sticker on the car itself, which Gladys didnt happen to go anywhere near during those few days. As a result of this callous and arbitrary act, she suddenly faced an enormous towing fee. Even after the car was sold at auction and the sale price deducted, she found herself pursued by a collection agency for $547. As a low-wage worker, there was no way she could afford this.

Not long after this incident, Gladys moved out of the King Way, whereupon H.R.G. gave her yet another slap in the face: a letter saying they were taking her entire deposit, citing no reason except mysterious ‘miscellaneous’ expenses.

Gladys joined SeaSol. On October 1st, she and 27 others marched into H.R.G.’s headquarters and delivered a demand: settle the $547 towing bill, and return the deposit in full.

When the two-week deadline passed with no resolution, SeaSol started putting up “Don’t Rent Here” posters around the King Way Apartments, warning prospective tenants about the abuses they might face from H.R.G. A few days later, we expanded this effort to cover more and more H.R.G. buildings, focusing on the largest ones which had vacancies to fill.

Soon after these actions got underway, H.R.G. mailed Gladys a response: a check for $300 in partial compensation for the towing, nothing for the deposit, and a letter arguing that she ought to accept this much and be satisfied. Gladys, furious at this, did not agree, and neither did SeaSol, so we stepped up the poster campaign and made plans to begin more serious actions soon.

At this point, an executive at H.R.G. called SeaSol and requested a meeting. Not wanting to be unreasonable, we agreed. Gladys and four other SeaSol’ers used the opportunity to explain to two H.R.G. executives (including the Director), in person, why we were standing by our original demand and would not be satisfied with less.

They went for the usual management tactic of trying to separate Gladys from the rest of SeaSol. The Director said, “Our goal is to satisfy Gladys, not SeaSol.” We replied that it was the same thing. Gladys had co-signed the demand, which was for the minimum amount needed to fix the bad situation that H.R.G’s actions had caused.

They asked, “How much time will you give us?”. We replied that we had given them two weeks already, and that ought to be enough.

A few days later, Gladys received another check. It included her entire deposit, plus the remaining $247 in towing fees.

Gladys says thanks to everyone who participated in this fight! She will be there for yours.