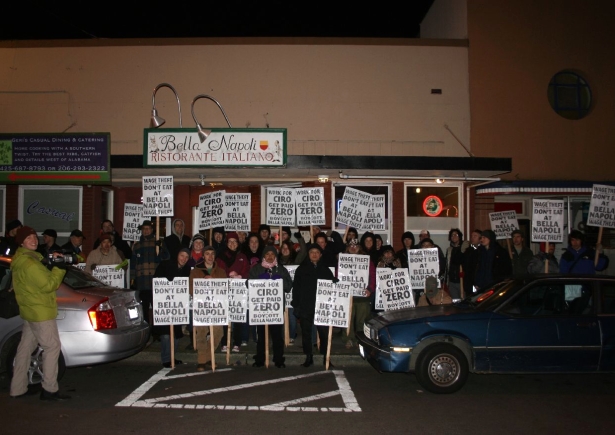 Here is the story of our latest fight, in Becky’s words:

For the entire month of September I worked for Ciro D’Onofrio at his Italian Restaurant in Renton, Bella Napoli. During this time, Ciro was verbally abusive towards his employees and even customers. He would throw temper tantrums in front of tables and claim we were out of things on the menu simply because he did not feel like making them. He would also hire different people to come in and help out on a weekend night with no prior experience and without training. This proved to be difficult, as I was the only server, bartender, hostess, food runner, and busser.

I still had to pay rent so I continued to work for Ciro. Things got hairy when I had $110 of my bank “disappear” one night when only he and I were working. Also, I needed my check and Ciro claimed that he only paid his employees at the end of every month. I thought this was strange, especially after I had seen him give a check to the cook, but I dismissed it. What was he going to do, not pay me? As you might have guessed by now, that’s exactly what happened. Ciro has made up every excuse in the book as to why he refuses to pay me the balance of $478, from a missing bottle of wine to incorrect invoices. It is clear that he never intended to pay me.

That was when I decided to call Seasol. After meeting with them we decided to inform Ciro that he had 14 days to pay up or we would start fighting back. Then for two and a half months we peacefully fliered, postered, and picketed. Meanwhile Ciro’s response was consistently violent: shouting profanity, spitting at us, assaulting us, throwing water and picket signs at us and more. We went down every weekend, twice a weekend recently, keeping his restaurant empty (or nearly) for any given dinner rush we desired. And through it all our numbers grew, with fifty picketers at a recent action on December 19th.

Conversely Ciro broke down week by week. Despite sending in faulty documentation Ciro was forced to pay Labor and Industries a portion of my wages, although he still refused to pay the entire amount. His business dwindled, while our numbers and dedication grew. Finally last week, in a matter of days Ciro spent a night in jail (with assault charges pending) for attacking a group of Seasolers while they were postering; Seasol and my fight received some much deserved radio attention on KCBS 91.3s One World Report; and most importantly, Bella Napoli Closed!!!

The day we delivered my demand letter was one of the happiest days of my life, I felt so supported and strong. With our strength and persistence we have shown, and will continue to show bosses like Ciro that they can’t get away with abusing their workers. And if they resist we are ready, willing, and able to shut them down so that they can never again commit such a despicable crime against the working class. There is power in numbers and support out there if you have a similar situation. Solidarity Forever!