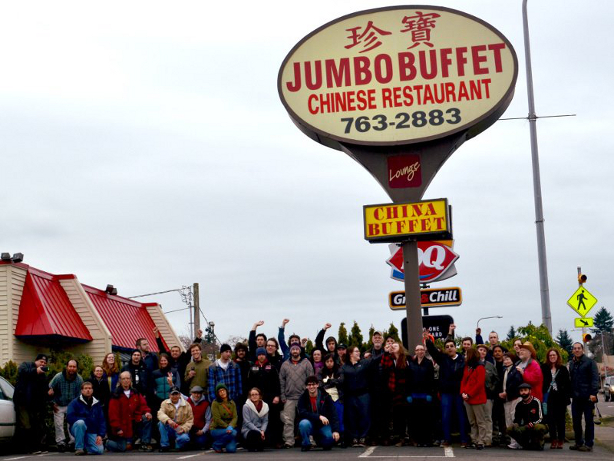 Marco worked for a restaurant called Jumbo Buffet in White Center for 4 months- overworked and underpaid. He worked 6 days a week for at least 10 hours a day for only $60 a day. He was given no overtime pay and no breaks. After getting in touch with SeaSol he decided to tell his boss that he was sick of these horrible working conditions. On March 10th, fifty SeaSol members marched into Jumbo Buffet to support Marco as he walked out of the kitchen and told his boss he refused to work under these conditions for another minute. Now he is on strike, demanding that he be paid the wages he is owed and that Jumbo pay all of their employees at least minimum wage, pay for overtime, and give employees breaks.

This conflict is not only about justice for Marco, it is about justice for all of Jumbo’s employees. Other former employees have already gotten in touch with us about how they were treated when they worked at Jumbo and how much money they’re still rightfully owed. Now Marco and SeaSol have begun distributing fliers, putting up posters, and holding small demonstrations outside of the buffet informing would-be customers about the establishment’s despicable labor practices.

Most people who SeaSol members have spoken with outside the restaurant on Sundays (Jumbo’s busiest day) are local residents and their families coming to eat a late lunch after church. They were largely surprised and distressed to hear that their favorite all-you-can-eat turned out to be shorting their neighbor on his wages. By a rough estimate, at least 75% of potential customers have turned away immediately after hearing Marco’s story. They have been happy to take their business elsewhere. There is a tremendous amount of support and solidarity in this community and we can have little doubt that with their help Jumbo Buffet will be forced to change their ways if they expect to remain in business. Please get in touch to learn more about how you can help Marco and SeaSol with this and other campaigns.