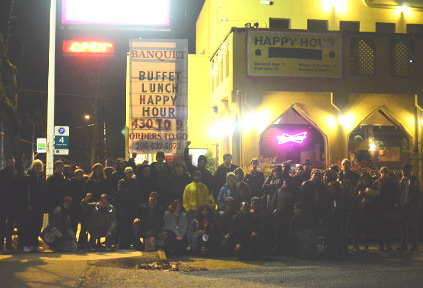 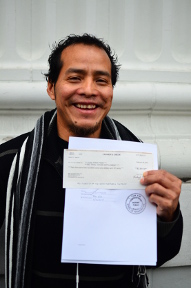 José endured seven months as an underpaid cook at the Bombay Grill in the University District, receiving hourly wages between 81 cents and $4. Adding insult to injury, he faced threats and intimidation from bosses Glen Quadros and Kailash Upadhyay on a regular basis. Because his wages were insufficient for rent anywhere else, José had to sleep on the floor of the filthy restaurant during the heat of summer (which Glen called “room and board”).

After seeing a SeaSol sticker at his local laundromat, José decided to stand up against his bosses and fight back using direct action. He called SeaSol and we voted to take on his fight.

On January 4, 2014, a large group of SeaSolers filled the Bombay Grill to support José as he delivered a demand to his former bosses. José and SeaSol demanded payment of the equivalent of one month’s stolen wages, which came to $2,261.30. Glen ignored the letter, looking with condescension at the faces surrounding him, as a waitress picked it up and read it aloud. During the two weeks following the demand delivery, Glen and Kailash neglected to pay José the portion of his wages he had demanded. As we knew the Bombay Grill would likely be closing down very soon, there was a degree of urgency in SeaSol’s approach to this fight which influenced major decisions we made at meetings.

In the following weeks, SeaSol’s campaign against the wage thieves Glen and Kailash escalated from small flyerings and posterings around the restaurant to larger, noisier pickets. Our largest picket was on February 14th; we turned away many Valentine’s Day customers with high-energy chants and noisemaking, leaving Glen and Kailash visibly upset at their loss of profits for the night and acting like fools in their parking lot. We turned away the majority of their business during every action, and the bosses slowly began to accept that José and SeaSol were not going away until the demand was met.

Throughout the fight, the bosses at the Bombay Grill gave us the run-around, claiming they wanted to meet up and pay at least once a week and then trying to negotiate paying a lesser amount, creepily trying to get José alone in the restaurant with them, and trying to talk José into “not telling anyone” about the conditions he faced working in their restaurant. On Friday February 21, 2014, the sleazy Glen and Kailash set up a meeting with SeaSol and José yet again, writing a check for the full demand. Immediately afterward, as José went to cash the check, the greedy and stupid bosses walked smirking out of the bank. They had canceled the check, and thought their problems were solved.

At noon the following day, a dozen SeaSolers showed up for a picket of the Bombay Grill’s lunch buffet. With this, Glen realized that he and his partner in crime had not outsmarted us, and went to the bank to get José a cashier’s check for the full amount of the demand, which José walked away with that same day. Thanks to everyone who participated in this fight! Victory is ours!