SeaSol’s months long dispute with the Low Income Housing Institute (LIHI) and executive director Sharon Lee has turned nasty. LIHI accuses SeaSol of racism, and has produced fraudulent photographs to discredit SeaSol and our member at the heart of the fight, George Berumen. This statement is to clear SeaSol’s record and to present the actual facts of the dispute.

George Against the Giant

In June of 2011, SeaSol was contacted by George Berumen, a former tenant of the Frye Apartments, an historic hotel managed by the Low Income Housing Institute. George met with SeaSol, became a member, and told us his story, backed by copious documentation including letters to and from LIHI. George had been wronged by LIHI. While a tenant at the Frye, his apartment was routinely filled with fumes he believed was smoke from crack cocaine, fumes that were making him feel sick. George repeatedly tried to bring his situation to the attention of the Frye manager and LIHI staff, but he says they didn’t believe him and failed to resolve the situation to his satisfaction. At this point, in April of 2011, he decided to move out into a homeless shelter rather than continue to endanger his health at the apartment.

After leaving the Frye, LIHI hit George with a bill for cleaning fees totaling $139.50, and withheld George’s deposit and advance rent totaling $99. These bogus charges are at the heart of SeaSol’s dispute with LIHI. While LIHI offers no justification whatsoever for its continuing to withhold George’s security deposit and advance rent, they claim that the cleaning fees are justified. They say it took Frye staff nine hours to clean a ten-foot by twenty-foot apartment, and have produced photos to show the state of the apartment after George’s departure. However, these photos are fraudulent.

On October 21st, we received an email from LIHI CEO Sharon Lee that included six photos, with filenames “Berumen Unit 1” through “Berumen Unit 6”. As we later learned, she sent the same photos to Real Change News, which describes them in a front-page article published October 26.

Four of the six photos merely show a few personal items left behind on otherwise clean shelves and tabletops – hardly something to require nine hours worth of cleanup, as LIHI has claimed. But the other two, named “Berumen Unit 4” and “Berumen Unit 6”, show filthy stove burners and a filthy bathroom floor and toilet.

Those photos are fraudulent, as you can see in the images below. The photo on the left was produced by LIHI, and claims to be of the bathroom in George’s apartment, 302. The one on the right is a still from video obtained by SeaSol and George of apartment 302.

These images are clearly of different bathrooms. In the first, the wall is to the left of the toilet; in the second image, which actually represents the bathroom of George’s apartment, the toilet is bounded by a wall on the right.

The video we obtained is corroborated by publicly available floor plans of the Frye third floor. Linked here are the plans for the entire floor. Below are details of the plans highlighting apartment 302, George’s apartment, which show that in that apartment the toilet should be bounded by a wall on the right. 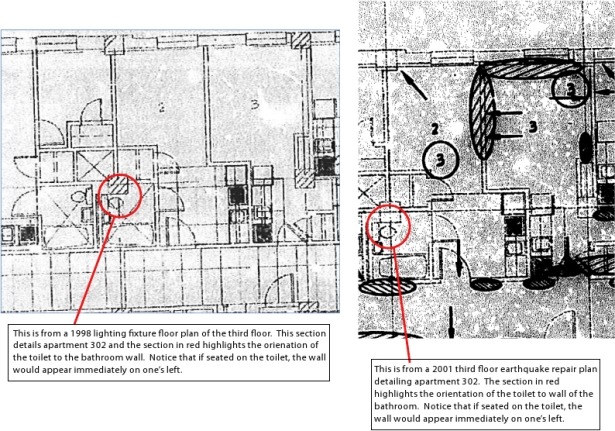 Finally, we noticed a discrepancy in the camera-generated “date taken” label within the photo files Sharon Lee sent: while the other four photos indicate they were taken on April 27th, the day that George moved out, those of the dirty stove top and bathroom indicate they were taken on April 11th, more than two weeks earlier. It appears that these two were older photos taken from a different apartment, which Sharon Lee found and renamed to “Berumen Unit 4” and “Berumen Unit 6”.

Sharon Lee’s use of inaccurate photographs to discredit George and SeaSol is a disgrace to the history of LIHI. However, even if the photos were legitimate, it is unjustifiable to charge George for nine hours of cleaning for such a small space. Either LIHI cannot properly manage its facilities, or the charges are bogus. Either way, George is not responsible for them.

LIHI takes fight to the gutter

Sharon Lee’s use of fraudulent photographs is just the tip of the iceberg. Throughout George’s dispute with LIHI and Sharon Lee, they have proved over and again their willingness to use dishonest tactics to discredit the legitimate claims of a former tenant.

Sharon Lee recently told Real Change news reporter Rosette Royale she first learned of the dispute through a series of posters SeaSol had distributed in Belltown. In fact, twenty SeaSol members personally delivered a letter addressed to Ms. Lee on June 28th describing the situation as we understood it. The letter gave Sharon Lee and LIHI two weeks to respond to resolve the situation. Sharon Lee and LIHI ignored us; they did not respond at all. LIHI produced no evidence at this time to challenge our assertions of the situation, or to move to seek an amicable resolution.

After two weeks, SeaSol began a poster campaign in the neighborhood of LIHI’s administrative offices, and we staged a small picket outside. LIHI finally decided to respond, by sending a threatening letter from the law offices of Puckett and Redford, a firm specializing in representing the interests of large landlords and property managers. The letter threatened to sue George, newly homeless and staying in a shelter, if he did not stop the campaign. These are hardly the actions of a group with a “sense of mission and…commitment to social justice.”

At this point, SeaSol and George learned that one of our claims around the manufacture of drugs in the adjacent apartment could not be independently corroborated, and we withdrew it from our future literature, posters, and press releases. But we continued to picket and poster at the LIHI offices and at LIHI properties throughout the city.

After the threatened lawsuit failed, LIHI and Sharon Lee changed tack. In an August 24th letter, LIHI invited George and SeaSol to discuss the issue in a face to face meeting. At that meeting, held on September 13th, Sharon Lee came into negotiations with a police escort, and proceeded to berate our members for exercising first amendment protected activities. Ms. Lee then promised to send us photographs of George’s apartment, but reneged on her promise, producing them only to the Real Change reporter a full month and a half after our request, and only one day before the article was set to print. (These are the photographs we soon learned were of another apartment). At the conclusion of our September meeting, Ms. Lee stubbornly refused to resolve the situation.

As their twentieth anniversary celebration approached, LIHI and Sharon Lee intensified their attack on George and SeaSol. In an October 19th press release on LIHI letterhead, Sharon Lee called SeaSol racist on completely spurious and cynical grounds. LIHI argued that because SeaSol took the side of George, who they repeatedly identified as a white man in the press release, we must be racist. However, George is Latino. It is unlikely having met George at the September 13th meeting that Ms. Lee did not know this. We wonder if Ms. Lee’s identification of George as a white man was a cynical ploy, counting on the fact that his name “reads white,” to slander a dedicated social justice organization.

The second ground for LIHI’s racism claim is that SeaSol distributed posters in the International District. Sharon Lee’s highlighting of ID postering as evidence of our supposed racism is ridiculous. The ID is a heavily trafficked neighborhood just a few blocks from the Frye apartments. Sharon Lee also knew at the time that we postered in many other neighborhoods in Seattle, including Belltown, the University District, Ballard, and elsewhere. We have a proud history of fighting racism, taking on fights for people of color, and at times including anti-racist demands as part of our campaigns – as our website attests. Furthermore, we are a multi-racial organization, and seek to end racism through organizing all peoples to work together to empower and support each other. The claims of racism made against us are incredible.

SeaSol members have now twice been threatened during our dispute with LIHI. In the most recent incident, a SeaSol member putting up posters in Sharon Lee’s neighborhood in the evening was pushed, threatened, and followed by the unidentified man in this video (YouTube). The assailant can clearly be heard saying “I will find you and I will kill you.”

In another incident, seen in the next video, a man we later learned was Sharon Lee’s boyfriend tried to intimidate members during an August picket line. His behavior was caught on video (YouTube).

In this incident the boyfriend stood immediately in the face of members, calling them obscene names, like “a fucking asshole” and “motherfucker,” and encouraging members to “take a swing” at him. At one point he claimed we had assaulted him and called the police. However, there was no assault – except his verbal abuse and attempt to intimidate our members. We believe his actions were designed to provoke violence on our picket line.

We hold Sharon Lee and LIHI responsible for the climate that led to both of these attacks. In the case of the intimidation from her boyfriend, the assailant and Ms. Lee have a direct personal relationship. In the case of the assault from her supporter, Sharon Lee and LIHI have produced a climate of vitriol against SeaSol. In numerous handbills, press releases, statements to the media and her supporters, Sharon Lee has called us “racists,” “liars,” “bullies,” and “extortionists.” This rhetoric has produced a situation where individuals may feel justified taking violent action against our members.

SeaSol takes any threat of violence very seriously. We have taken precautions to protect our members from those who wish to do us violence at future actions. The methods and tactics of Lee, LIHI, and their supporters are deplorable.

The repeated history of such dishonest and outrageous behavior is a discredit to the history and tradition of LIHI, an organization that bases its principles on tenant self-management and social justice. Instead, Ms. Lee’s and LIHI’s behavior has been unethical from the beginning. George and SeaSol have justice on our side; we will not give up until George gets the money he is owed.