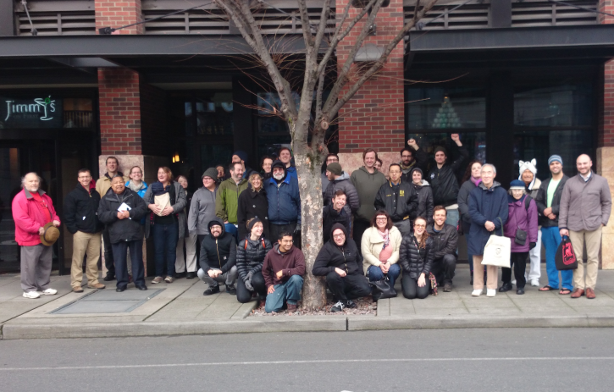 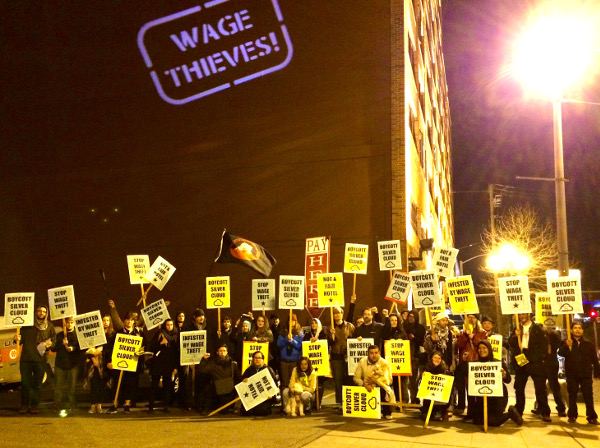 Our dear friend and comrade, Prospero, passed away quietly on July 18 while enjoying a movie at the theater. SeaSol and Prospero had just won the fight against Silver Cloud Hotels on the 16th. We are incredibly lucky to have gotten the chance to know Prospero. We will remember him for his kindness, generosity, and determination to fight for justice.

Prospero was a warm and humble man, but also a tenacious fighter. He worked hard, washing dishes and working as a custodian until the end of his life. Despite old age and failing health, he stepped up again and again to participate in SeaSol, first for Neftali’s fight against Greystar last summer and then for his own, because that was what he believed in. In strategy discussions at meetings, he often said, “We need to hit them harder!” We never saw him happier than on the picket line.

Prospero worked for Silver Cloud Hotels for several years as a dishwasher for their in-house restaurant, Jimmy’s, before suffering a heart attack on the job. His manager was reluctant to let him leave work and refused to call an ambulance, but eventually paid for a taxi to take Prospero to the hospital. While Prospero was recovering, the manager at the Stadium Silver Cloud Hotel fired him for having a heart attack, using the outrageous excuse that Prospero “no call, no showed” while he was in surgery for a heart attack he suffered at work. In addition to unjustly and illegally firing Prospero, Silver Cloud stole the accrued sick and vacation pay Prospero had earned over the past two years rather than paying out the leave at the end of his employment. Their actions were in violation of the federal Family Medical Leave Act, city law, and universal rules of human decency. They thought they could get away with mistreating and stealing from a poor, 76-year-old man. They assumed Prospero would not stand up to them. They were wrong.

Prospero made efforts to contact management for months to discuss the unjust firing and stolen wages, to no avail. He came to the Seattle Solidarity Network at the recommendation of a friend who had seen SeaSol in action in the past. When he first came around, we had no capacity to take on new fights. That never stopped him from doing his best to make it to every meeting in spite of his health. He helped out with other people’s fights, which we won with his help, not once asking us when we would be able to begin his. He wanted to help everyone that he could. When we finally were able to begin his fight in late 2015, we discussed our demand for the fight and what we would consider a win. He was adamant that it was not about the money for him, that it was about letting management know that they can’t treat people the way they treated him. Most importantly, he wanted to show his former coworkers that it is possible to stand up for yourself in the workplace. In late January 2016, Prospero and a group of forty fellow SeaSolers delivered a demand to the manager of the Silver Cloud: Pay Prospero his accrued sick and vacation leave, or face further direct action from SeaSol. Unwisely, the company did not respond.

For six months, we engaged in a tireless direct action campaign against the hotel chain. With support from our comrades in the Portland Solidarity Network, we postered around Silver Cloud hotels and handed out fliers in both cities. We held a series of noisy early-morning pickets in front of the Seattle hotels, very successfully annoying management and guests. We had a noisy late night picket complete with a message projected on the side of the hotel (our first light action) labeling Silver Cloud “wage thieves.” We visited the owner, Jim Weymouth, in his wealthy Medina neighborhood multiple times to alert him and his neighbors of the injustice Prospero suffered working at his hotel. One of these visits involved a land picket in front of the Weymouths’ 6-million-dollar home and a simultaneous lake flotilla on the water behind the house. We reached out to companies who hold conferences at Silver Cloud, discouraging them from doing business with the hotel.

We had another picket in the works when Prospero received his long-awaited check in the mail. We grieve the loss of our friend and comrade, and take some comfort in knowing that he got to enjoy a little taste of victory while he was still with us. We will have a gathering this month to celebrate Prospero and the Silver Cloud fight. For details, please contact info@seasol.net.