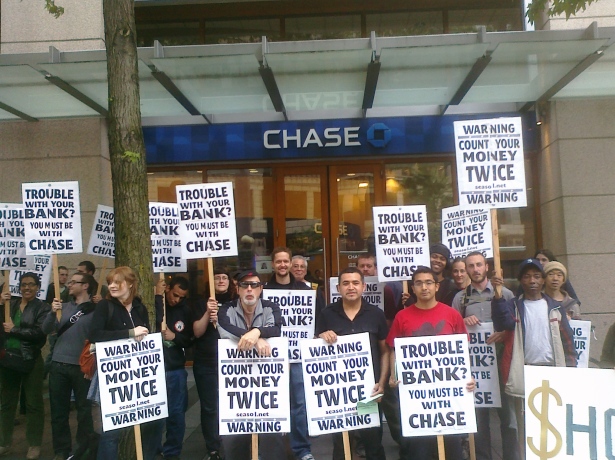 When longtime SeaSol member Neftali needed Canadian money for a trip to visit family, he went to a downtown Chase bank branch, near his work.  There, what should have been a simple transaction turned into a nightmare. Although he came prepared with his Chase debit card and PIN, his valid temporary driver’s license, and his expired license, none of it was enough.  He was hassled, questioned aggressively, and told he needed to go home and bring in his passport to prove his identity – or perhaps it was his immigration status? Neftali, who is a dual U.S./Mexican citizen, was furious at this treatment and demanded to speak to the manager.  Finally, they allowed him to complete the transaction. He took the Canadian cash and left for his vacation, thinking the whole awful Chase experience was behind him. But it was just beginning. He soon realized, to his shock, that the stack of bills Chase had given him contained $1,000 less than it was supposed to.

Once back in Seattle, Neftali confronted Chase management about the missing money. They wouldn’t believe him. He asked to see the surveillance video of the transaction, but they refused to let him see it, despite admitting that it existed and that the teller had broken bank policy in the way the money had been handled.

So on May 31st, Neftali marched back into the bank together with thirty other SeaSol members. Our demand: either give Neftali his missing $1,000, or else show the video footage to prove their claim that they’d handed him the correct amount.

After two weeks went by with no response from Chase, we started turning on the pressure. We covered the area around the branch with posters warning customers, “Banking with Chase? Count it twice!”. Chase kept ripping them down, so we kept reposting them continually over the next three months. Meanwhile we picketed the branch twice, then expanded our pickets to cover four other downtown Chase branches. The posters began featuring a large photo of the branch manager’s face. Chase still wouldn’t yield, so we began looking for ways to pressure higher-level company officials. When the Chamber of Commerce invited Chase’s northwest regional CEO to address a “Young Professionals” event, SeaSol’ers were there leafleting the crowd while wearing mocking signs with her face printed on them.

Finally, after one more noisy multi-bank-branch picket, Chase’s District Manager arranged a meeting with Neftali to discuss resolving the dispute. The manager wanted to meet with him one-on-one behind closed doors, but Neftali insisted on bringing two other SeaSol members to back him up.  At the meeting, the district manager delivered a lecture about how upset he and his colleagues were about this conflict and our tactics, and about how Chase admitted no wrongdoing. Then he handed Neftali a check for $1,000.
Thanks to everyone who took part in the actions that brought about this victory! We proved that when we’re united and determined, even enemies as gigantic as JPMorgan Chase are not invulnerable.